Falconry Of Kenya, Malindi – What A Thrill!

Hey Peaches, welcome back to my blog. Today, we are going to the Falconry of Kenya in Malindi. The Falconry of Kenya is a private sanctuary in Malindi for birds and reptiles. Serves as a tourist center to promote awareness and conservation so that people can learn about different species. Moreover, it provides habitat and feeding programs for their wildlife.

Jay was in Malindi accompanied by her Mom, Caroline. The falconry sounded like a great plan out of the ordinary to share new experiences together.

We drove down following google maps direction which led us on the doorstep of the falconry signaled by the door entrance sign without any hustle. We alighted the car and made our way in.

On entrance, there were four old Italian men chilling at a round table drinking beer.

To our disappointment though, the place looked run down which made us skeptical  about it being open *fingers crossed*  Luckily, the receptiontionist was present who also happened to be the tour guide.

The entrance fee is kshs. 200/- each for the tour. After paying the guide, our tour commenced.

Welcoming us into the sanctuary, was a giant old Aldabra tortoise over 100 years originating from Seychelles.

Aldabra giant tortoise is actually one of the largest tortoises in the world and can reach upto 550 pounds and ages to 150 years old. Conserved to prevent it from going extinct. Our guide informed us that it is vegetarian can eat about 20 bananas and 40 kilos of grass on average per day. 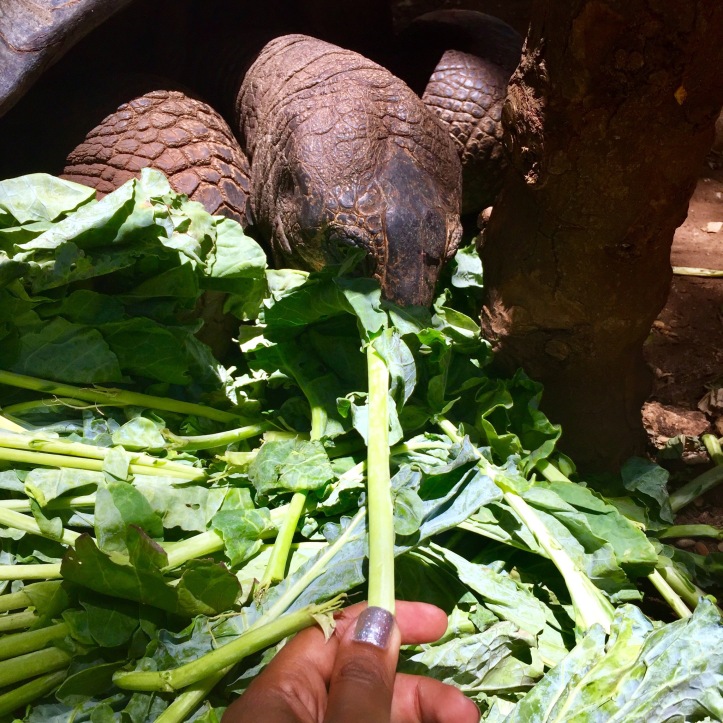 Next, he led us to an extraordinary adventure of a hugging eagle. Our guide gave each of us a huge hard skinned glove that had a cube of meat which attracted the eagle to my arm in fast flight and landed on its sharp claws. I could feel the weight when it landed on my arm and the strong wind swooshed by its huge strong wing feathers. We did that with the falcon too which was heavier! It was a thrilling experience! 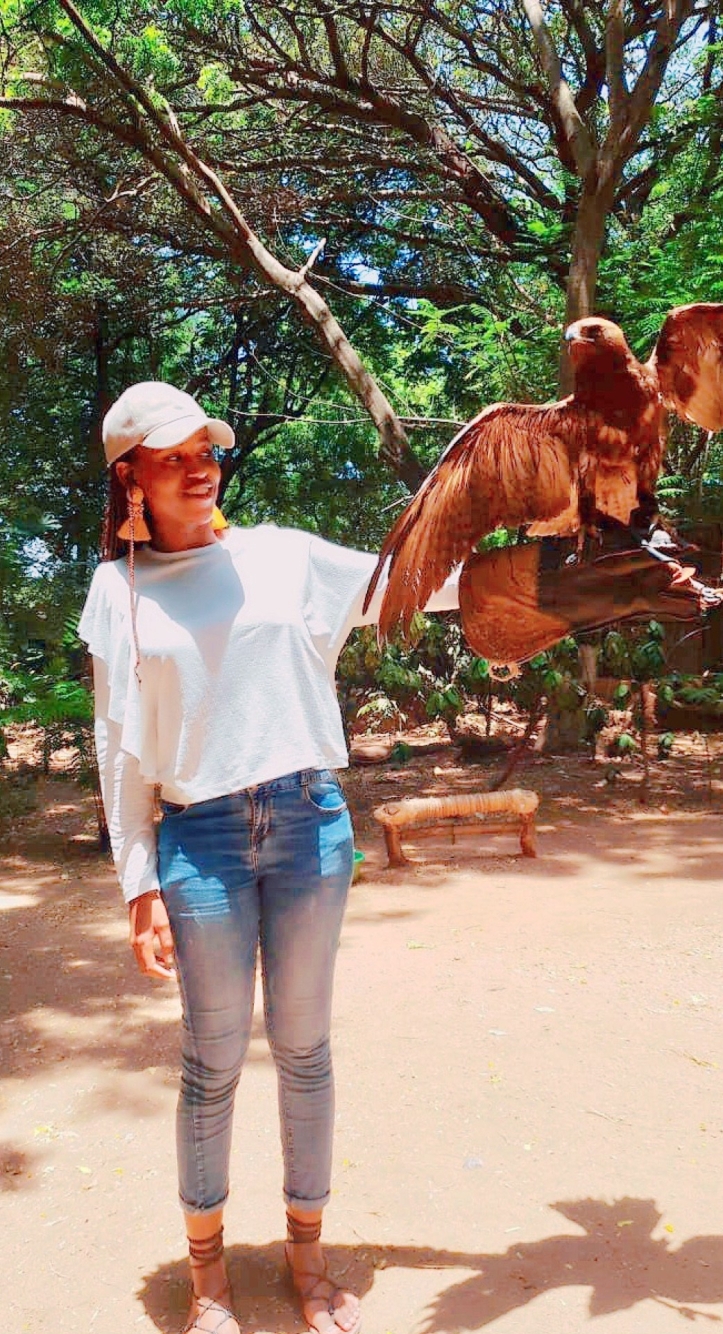 A few steps forward, was a line of net cages which had different snakes species. Some venomous, a few not.

Among the snakes we saw were the venomous Black Mamba, Puff Adder, African Rocky Python,  and Black Necked Spitting Cobra. 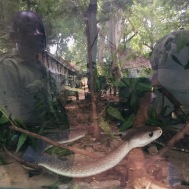 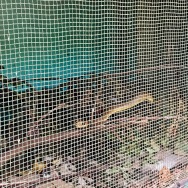 They were NOT pleasing to my eyes. But I can say the green mamba’s neon green skin is so attractive. 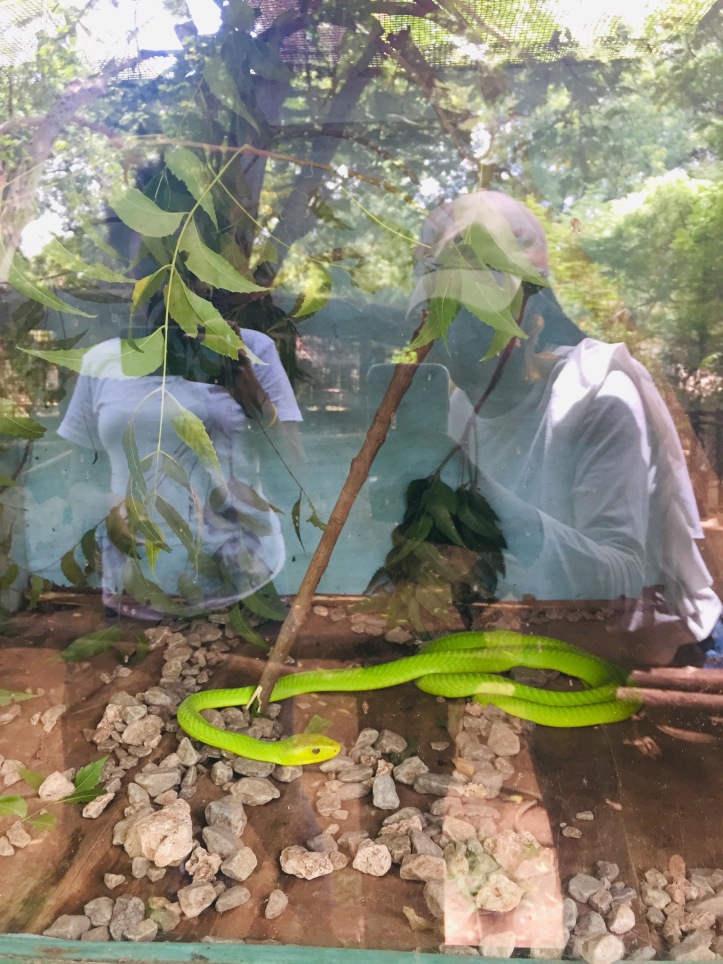 Their eyes and hissing sound of tongue raised every single hair in my body. My snake phobia is too real.

To make it worse, our guide uncaged a small grey snake holding it on his hand and daring each of us to hold it. Caroline was brave enough but Jay and I could not hack that.

I literally just touched the snake with the tip of my finger and it sent chills down my spine making me scream with fear. Welp!

Biokenafrica – snake conservation – recently documented, “A snake is an animal, it is not a shetani, it is not a serpent and we have to put all that away. If you find it in your house, give it space to run away.”

The scariest snake was the deadly python and the weirdest thing to see was python poop.

Other reptiles we saw were monitor lizards, baby tortoises conserved in their pen and crocodiles.

Did you know that crocodile meat is tasty? 😋 Tastes like chicken and fish. Yes, I have to admit, I had a bite of crocodile meat in Watamu a few months ago. Additionally, it is good for your heart, lungs, blood circulation and it is known to cure asthma and coughing problems and their fat is rich in skin-healing/softening ingredients that are used to treat eczema and psoriasis.

Lastly, we explored a handful species of birds. Generally, birds are known to be biological controls, balancing the food chain.

We learned through our guide that there are more than 200 owl species in the world. In Kenya, however, we have approximately 17 species of owls; we saw a handful. The owls are nocturnal creatures with superb eyesight and huge ears framing their heads into disk-like shape. Their ears have strong hearing capabilities designed for hunting at night.

Sadly in most cultures, especially our African cultures just like snakes, owls are superstitiously subjected as a sign of bad omens. European cultures too believe that the barn owls are ghostly because they are mostly seen in graveyards.

Interestingly, a single owl can consume 1,000 mice a year, hence they can be used as natural rodent controls in farming to replace toxic rodenticides and other harmful chemicals.

Bush babies are cute and tiny with plaintive cries like babies.  The bush baby was playful hiding itself in a small pot in its cage.

What I found sad was some of the birds were tied down to small pots.  However, the guide assured us that the birds get untied for them to fly out as they always find their way back. 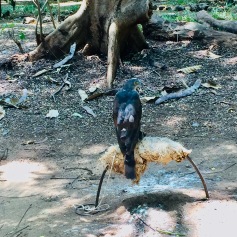 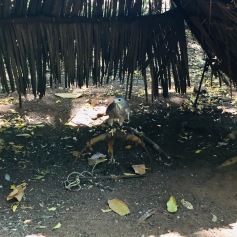 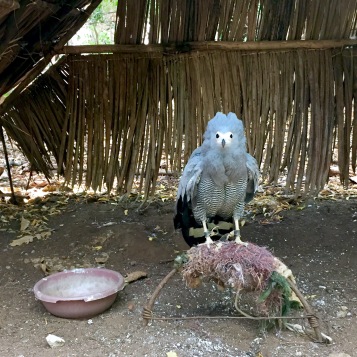 Surely, it was an educational and exciting experience.

Nevertheless, The Falconry of Kenya in Malindi is an exciting way to pass time and enjoy with your friends and learn about different species of birds and reptiles. Experience an extraordinary adventure of holding either a falcon, owl, or eagle or all in turns. A snake too! *yikes* Enjoy the thrill Peaches.

Welcome to my blog Peaches